The Legend of Ezmerelda 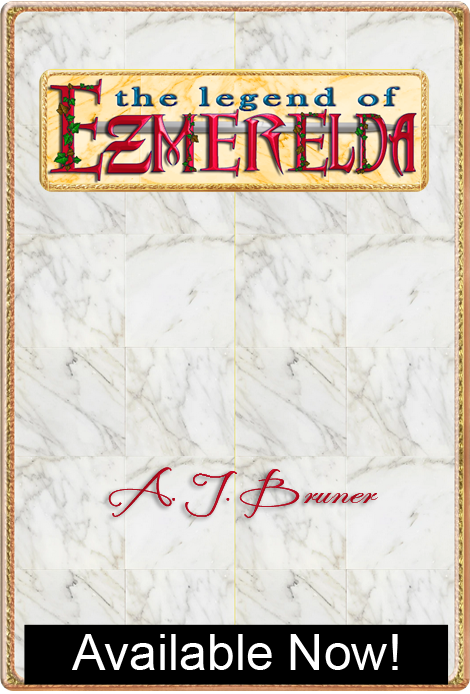 this game is inspired by Nintendo's(tm) mid-80's game that revolutionized RPG console gaming. Many hours were spent playing the original game, as well as several of the sequels.

Game Description:
The Legend of Ezmerelda is an adventure roleplaying game, based in the late 1400s, in a fantastical version of France and central Europe. 1 to 6 players may select a character to represent themselves in the gaming world and to develop a character over time, while exploring new locations, rescuing friends, finding lost artifacts, and completing quests. Optionally a player may create their own character from scratch. Story-lines are enhanced by factual Romani culture and history. The story centers around Ezmerelda, a French Roma adventurer, formerly a member of a dancing troupe along with her husband. She now uses her skills and abilities to uncover clues about her husband's murderer, Duke Grummen, and to hopefully bring justice down upon them. Along the way, she crosses paths with some unique people that aid her in her quest.

Game Play:
Players will utilize a character sheet and one 6(six)-sided die, or d6, in order to track various statistics about their chosen character that is then affected by the choices that player makes. Each player may select Fast Play, uses a pre-made character, or Slow Play and begin one of their own. Slow Play requires players to train each skill and ability they want their character to have, from 0(zero).

Quest cards allow parties to travel across the world to collect items to be used as weapons and armor, or returned to the city for a reward in the forms of Gold and/or Notoriety. Gold is used to purchase supplies, for training new skills and abilities and for paying bail should they get arrested. Characters advance Levels by gaining in Notoriety. Every 100(one hundred) points of Notoriety is equal to 1(one) full Level. As Levels increase, so too does quest difficulty and the party is exposed to tougher enemies. All Skill and Abilities stop at 100, but players may continue to level their character to "max out" all the stats.

Players may also freely travel around the world, but regardless if traveling freely or because of a quest, Monster Checks occur every 5th(fifth) turn. Parties must camp to refresh used skills and abilities and to train new ones. Every 24 hours, the party stands a chance of being ambushed by "misguided citizens" that have turned to bounty hunting Rom, calling themselves "Gypsy Hunters".

A. J.'s Notes...
The idea for this game has been lingering on my mind since I was about 11 or 12 years old. I did spend a fair portion of my youth playing video games, but I couldn't keep up with the Joneses. While many of my friends had the latest consoles or PC games to play, it was years before I graduated from my Atari 2600 to a Nintendo(tm) console. The particular game this has taken inspiration from, I spent hours playing. It was one of those games that I didn't want to turn the console off when I wasn't playing. You didn't know for sure if it would actually save your progress! It was not until I was much older that I had time to actually complete the game, but it was fun to play regardless. When it came time to put this game together, I realized I had an opportunity to correct some past mistakes and to also bring some written justice to the impressive culture of the Romani people, to which I have some affinity. Players will notice that simple ideas in the game are quite complex just because players might be associated with Ezmerelda and no shopkeepers willingly do business with "gypsies". This requires the players to find different ways of accomplishing their goals and they have to always be on the lookout for the Gypsy Hunters* too!

The phrase "gypsy hunters" here is used to name what historical documentation describes as squads of townsfolks or bounty hunter types tracking down groups of Rom and expelling them from the area by: returning them to some local authority, chasing them away or worse killing them, even those that were suspected of being or associating with Rom. The atrocities and abuses perpetrated against the Romani people dates back over hundreds of years and many of them were gruesome.

December 19th, 2021: ATOM not communicating with TTS caused a manual re-write of all the game code.

December 2nd, 2021: The Legend of Ezmerelda has been published on Steam via Tabletop Simulator.

May 24th, 2021: Party skills; a player's active skill affects the other party members.

January 17th, 2021: Published the Ninth Edition of the Instruction Booklet. New sections on Jail and Shops.

October 10th, 2020: The Tabletop Simulator version is almost complete. Some more details to add to enhance the storylines and streamline gameplay.

October 6th, 2020: Published the eighth, and final edition of the instruction booklet.

October 5th, 2020: Began setting up the components for the Table Top Simulator version on Steam.

October 1st, 2020: Published all of the maps, including 7 Detail maps and 1 World map. Published the sixth edition of the instruction booklet.

September 29th, 2020: Published the fifth edition of the instruction booklet.

September 27th, 2020: Published the fourth edition of the instruction booklet.

September 24th, 2020: Published the third edition of the instruction booklet.

September 22nd, 2020: Published the second edition of the instruction booklet.

September 21st, 2020: Published the first edition of the instruction booklet.

the Legend of Ezmerelda on
BoardGameGeek.com

the Legend of Ezmerelda
for Tabletop Simulator, via Steam!
Download