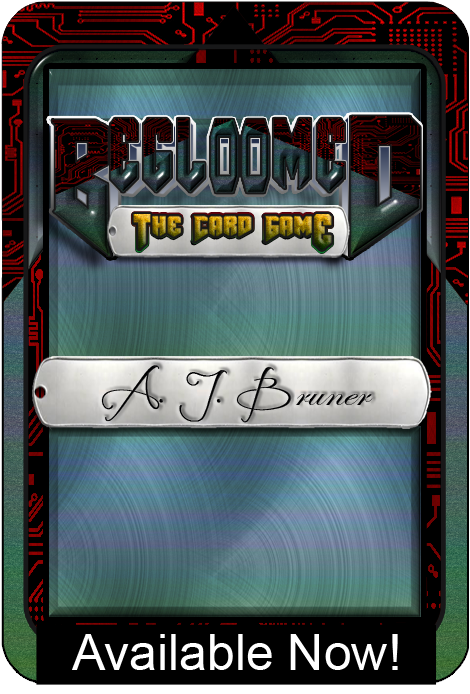 Begloomed, the Card Game was created in the "spirit of iD Software's popular First Person Shooter from 1993" (first person - as viewed through the eyes of the main character, shooter - includes unrealistic weaponry), converted to a card game, with a dungeon crawl. You star as the main character, Our hero Begloomed Person, and you have been transported inside a mainframe to eliminate the viruses! Players will draw cards from several piles to determine: each dungeon layout, where the monsters are positioned, how many monsters in a position and the type(s), plus item location(s) and type(s). Combat is relatively simple, but calculations are required

.
1 Round of Combat:
Player is allowed 2 Actions per Round - Attack/Attack, Attack/Heal, Attack/Move, or Heal/Move (in any order)
Monsters have 1 Action per Round - Attack or Move
Bosses have 2 Actions per Round - Attack/Heal or Heal/Move
Players draw from a Damage pile to determine how much damage each target/monster receives. Players may also declare 1 target receives all damage. That means during a Round, if a player uses two Attacks, one could target 1, and the other would hit all the other monsters. In order to advance to the next level, players must collect a number of key codes to unlock the firewalls.

Game Description:
Begloomed, the Card Game, is inspired by iD Software's popular First Person Shooter from 1993. 1 or more players is/are charged with saving their Mainframe from Glooms. Players use cards to: create level maps, rooms, as well as positions for Items and Enemies.

It is an exciting adventure of exploration, combat, and survival as you try to eliminate the viruses that are invading the Mainframe from another dimension and collect the key codes to unlock the Firewalls.

Players begin each Level by drawing and arranging 16 Map Cards so they are all connected. As they move onto each Map Card, they are entering a new Room and then must draw 10 Room Cards and place them anywhere on the Room Mat.

Then they draw 3 Item/Weapon Cards and 3 Monsters Cards. These may be placed anywhere in the Room, but must be at least 3 squares away from the Hero's starting position. Line of sight is critical, as players may not target objects behind walls and storage containers. Finally, they move through the Room picking up the Items/Weapons and defeating or avoiding the various Monsters.

This process is repeated for each Room until they have picked up the 3 Key Codes to unlock the Firewall and advance to the next Level.

Levels increase in difficulty as more Monsters are added every 3rd Level. Adding players means doubling the Monsters per Room (and Room size as needed) and then everyone works together to clear each Level. 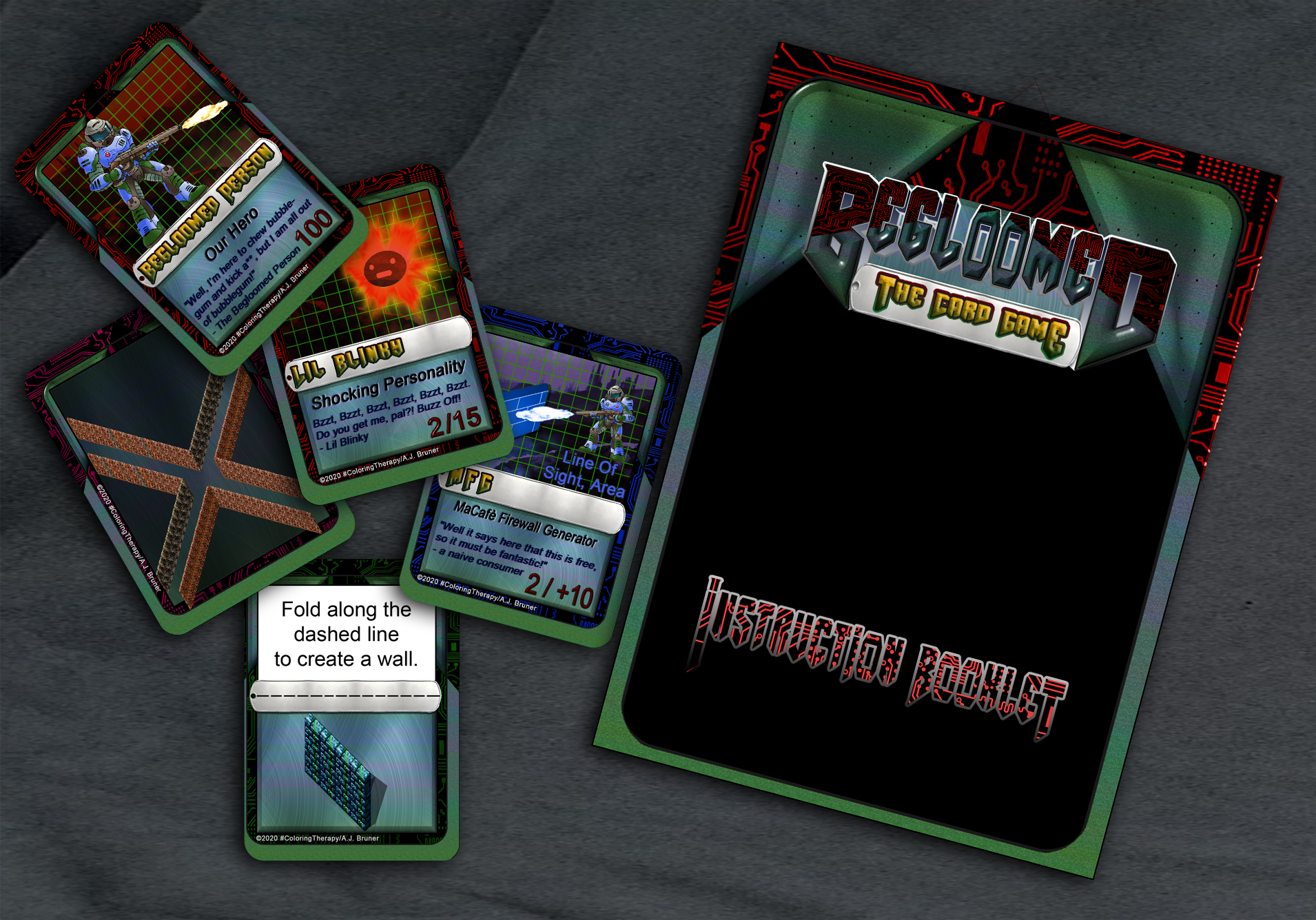 A. J.'s Notes...
The idea for this game popped into my head one day and I set about tracking down folks to get permission to create a card game version of this particular video game franchise. However I was met with some resistance from the company that owns the IP. It was then that I decided to create more of game "in the spirit of". The next day, I had the concept art assembled (that you see currently) and began working on the individual cards and instructions. In order to achieve the "First Person" aspect for the game, I designed the Room Cards to be folded like a "tent". While still being able to see from the top down, players may also "look" into the Room from the perspective of the Hero. Regardless of how the player is seeing the cards, line of sight is critical for combat. You cannot see through Walls or stacked Storage Containers. However, you can see over a single storage container, but if you attack, the monsters receive less damage because of the obstacle.

September 9th, 2020: Published the instruction booklet and made it available for viewing online and downloading.

Begloomed, the Card Game on
BoardGameGeek.com

Begloomed, the Card Game
for Tabletop Simulator, via Steam!
Download